Warning: "continue" targeting switch is equivalent to "break". Did you mean to use "continue 2"? in /wp-includes/pomo/plural-forms.php on line 210
 Luty 1996 – Archiwum Kolędnicze
Przejdź do treści

The first play performed by the group, in 1988, was Historie Vincenza (“Vincenz’s Stories”), Hutsul – Jewish stories based on the book Na wysokiej połoninie, by Stanisław Vincenz. This piece utilised music and songs from the Hutsul village communities of the Carpathians as well as Jewish tunes, village instruments (such as the Ligawka, a long wooden advent horn; fig. 1) and puppets inspired by traditional szopka puppets. In March 1992 they premiered Gospoda ku Wiecznemu Pokojowi (“Inn of Eternal Peace”; fig.2), based on the Czesław Miłosz novel, Dolina Issy (“The Issa Valley”). This work, being based in a village in the Polish Lithuanian borderlands, utilised old songs and a staging aesthetic that suggested wooden huts and a village tavern (using barrels and wooden tables etc). 1996 saw an adaptation of The Canterbury Tales. This piece made a greater use of medieval music, reflecting the increased interest by members of Schola (see below). My own entry into the field in 2000 led to the creation of a multi-lingual piece based on The Kalevala. ‘Research expeditions’ were frequently held during this period, in a similar vein to those of Gardzienice. In 1990 the first Easter carolling expeditions to villages in the Suwałki region (north Poland), which have become an annual activity, were undertaken. In 1995 a Christmas carolling expedition (Kolęda) was undertaken in Węgajty village itself. Carolling expeditions to Suwałki and the Carpathians have become regular fixtures of the group’s work.

The move to Węgajty, while being seen as a move to allow greater freedom, also raised awareness of the group and generated some different kinds of attention (including more suspicion from the authorities). The local villagers were apparently unsure of these in-comers, not sure who they were or what they wanted, particularly because of the mixture of languages being spoken. Apparently an early rumour in the village was that these outsiders were Jews and the locals sometimes referred to the theatre as the Synagogue. The Kolęda expedition to Węgajty village was seen as a vital point in the relationships between the theatre and the village. Having undertaken research in the village amongst some of the Warmiak families the group undertook a 14-hour carolling expedition around the village. Sobaszek later referred to the relationship with the villagers, “Our bond with the inhabitants of Węgajty is a permanent one”. (Kuligowska – Korzeniewska, Pg 5). Erdmute Sobaszek also pointed out that prior to the Kolęda expedition there was no contact with the people of the village.
Around 1995 there occurred a major division in the group when the several of the members began to explore the theatre of Liturgical drama and old Church music. This developed into a musical research and performance group known as Schola, which has been very successful, producing and performing several pieces, touring 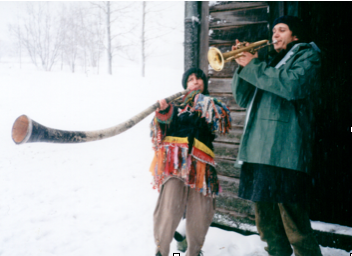 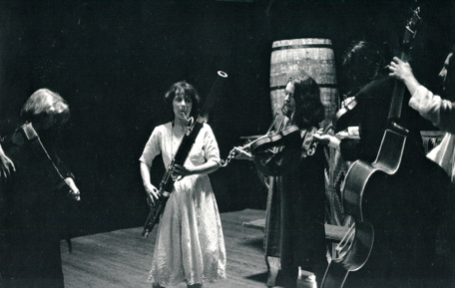 extensively in Poland and abroad and collaborating with international groups. The Sobaszeks (and other members) continued to work with traditional village music and dances, carolling etc. under the title of Projekt Terenowy. Although the two parts of the group worked together as Teatr Wiejski Węgajty, continuing to do so when performing the old repertoire, they have effectively developed as two different entities, although both utilise the space of the theatre building. By the end of my fieldwork period it seemed that no new theatrical work would be done between both groups.